Well, it’s Day 17 of our 29-day Epic Europe Family Adventure. We have had so many exceptional and unforgettable experiences. This is our third day in Rome, and it has nothing short of Epic. It started by seeing Pope Francis!

(By the way, this is my 11th blog post published so far during our 29-day “Epic Europe Family Adventure.” If you’re interested, all previous trip reports from this Epic Family Adventure include are listed and linked to at the bottom of this blog post.)

After seeing the Pope, we hurried over to the Vatican Museum to meet our private guide for a tour of the museum and the Sistine Chapel. We were all exhilarated about seeing Pope Francis, and as we dodged in and out of traffic and crowds of people to get the museum, where we met Alberto and started the tour.

The Vatican Museum is one of the largest museums in world. I knew it was big and spectacular, but I had no idea what we were in for. Now, by now, I realize you may think I’m just easily blown away. After all, it seems like the last 2-3 posts I’ve remarked how I’ve been blown away. But really, I’m not easily blown away. These sights are just spectacular.

Following are several photos of works of art that particularly inspired awe for me.

The Sistine Chapel was our last stop, and we were full of anticipation… The Sistine Chapel is the official residence of the Pope, in Vatican City. The chapel gets its name from Pope Sixtus IV, who restored the chapel from 1477-1480. The chapel serves as a place of both religious and functionary papal activity, and is the site of the Papal conclave, the process by which a new pope is selected. The fame of the Sistine Chapel lies mainly in the frescos that decorate the interior, and most particularly, the Sistine Chapel ceiling and The Last Judgment by Michelangelo.

Before entering, our guide provided a lot of interesting insights that we didn’t previously know. Originally, the Sistine Chapel’s vaulted ceiling was painted blue and covered with golden stars.  The walls were adorned with frescoes by different artists. In 1508, Pope Julius II (who reigned from 1503-1513) hired Michelangelo to paint the ceiling of the chapel – to change its appearance entirely. Before this time, Michelangelo had gained fame through his work as a sculptor, especially as a result of his great works, David, and Pieta. Our guide explained that at first Michelangelo wanted no part of the project. He loved 3 dimensional work too much. But, our guide explained, about a year later he was compelled to say yes and he began his work on the ceiling of the Sistine Chapel.

The importance of the project was pressure enough, but add to that the working conditions the artist had to experience. Paint and other materials would fall onto his face as he lay on scaffolding to paint much of it. Because he was painting on a ceiling, his neck was always craned, and he had the challenges that came with fresco painting (working with fresh and wet plaster, under a time crunch). It took  Michelangelo, who started the project when he was 32 years old, 4 years to finish.

Like I said, visitors are not allowed to take photos, so I don’t have any photos to share. I just can’t find adequate words to describe the experience of standing in such a spectacular chapel and being totally immersed in the beautiful – seemingly miraculous paintings – that tell such important stories so visually and in such an inspiring way. The impact of my experience will be lasting.

While nothing is as good  as standing in the chapel yourself, and looking at, and taking in, Michelangelo’s frescoes, the good news is this is perhaps the next best thing – a virtual 360-degree look at the Sistine Chapel, provided by the Sistine Chapel.

Well, after that glorious and epic first half of our day, we found a pizzeria and ate another delicious meal before continuing on foot to see some more sights.

We walked next to the Trevi Fountain, which was designed by Italian architect Nicola Salvi and completed by Pietro Bracci. Standing 86 feet high and 161 feet wide, the Trevi is the largest Baroque fountain in the city, and one of the most famous fountains in the world. We can see why. I’m including a photo below.

After having a gelato while sitting in front of the spectacular Trevi Fountain, we went looking for the Pantheon.

The Pantheon (temple of every god) is a building in Rome, on the site of an earlier building commissioned by Marcus Agrippa during the reign of Augustus (27 BC – 14 AD). According to Wikipedia, the present building was completed by the emperor Hadrian, and probably dedicated about 126 AD.

The building is circular with a portico of large granite Corinthian columns (eight in the first rank and two groups of four behind) under a pediment. A rectangular vestibule links the porch to the rotunda, which is under a coffered concrete dome, with a central opening (oculus) to the sky. Almost 2,000 years after it was built, the Pantheon’s dome is still the world’s largest unreinforced concrete dome. The height to the oculus and the diameter of the interior circle are the same, 142 feet. It was staggering to look up at. (see photo)

The Pantheon is reportedly one of the best-preserved of all Ancient Roman buildings, probably because it has been in continuous use throughout its history. (Since the 7th century, the Pantheon has been used as a church dedicated to “St. Mary and the Martyrs,” but informally known as “Santa Maria Rotonda.” The square in front of the Pantheon is called Piazza della Rotonda.

To cap off what was another inspiring and fulfilling day for my family and I, Jerry and I went on a date night. The boys were excited to get epic pizza from a pizzeria that is next door to our apartment and some other snacks. They were actually looking forward to a night of “chillaxing.” So Jerry and I headed to the wonderful and romantic Bernini Ristorante, which is just steps away at the Piazza Navona. Here are a couple of photos: 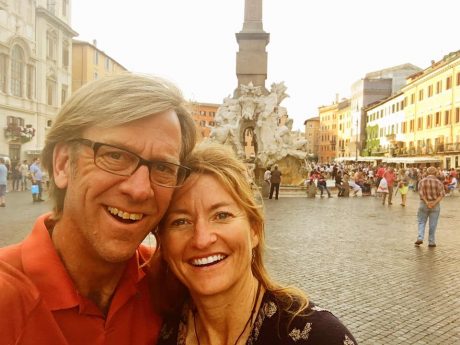 Thank you for reading my blog, and for following along with us on this Epic Europe Family Adventure.

Up next: The Colosseum!