Jerry, the boys and I are right now spending time in Montrose, Colorado, and having a great time. We are here visiting my sister, Alicia, her husband, Denny, and their awesome children, Mallory, Mae and Royal. 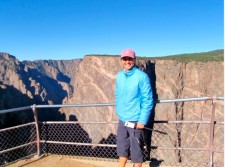 Montrose, home to about 15,000 people, is a great mountain town. Located at 5,800 feet elevation, it’s bigger than the small town of Lander, WY that we live in, but not quite a city.

If you’re into the outdoors and natural beauty, you’ll agree with me that Montrose’s greatest asset is its location. We see why this is. It’s the “hub” that connects the popular mountain town of Telluride, about an hour away, Ouray, a half-hour away, and Gunnison an hour away, Black Canyon of the Gunnison National Park, Ridgeway State Park, and other notable destinations. Also in the greater Montrose region are the Gunnison, San Juan, Uncompahgre, and Rio Grande national forests.


Black Canyon of the Gunnison National Park has been on our list of places we want to experience for some time. So this morning we headed out with Alicia and Denny and our kids.

The Gunnison River descends 43 feet per mile through the canyon, making it one of the steepest mountain descents for a river in all of North America. (Wikipedia: By comparison, the Colorado River drops an average of 7.5 feet as it flows through the Grand Canyon.) In fact, the the most significant descent of the Gunnison River occurs in the park at Chasm View dropping 240 feet per mile!


The Black Canyon is so named because it is so steep that it’s difficult for sunshine to reach into the canyon, resulting in a dark, “black” canyon that is often in a shadow. The narrowest section of the canyon is only 40 feet across.

The extreme depth of the Black Canyon is a result of several geologic processes acting together. The Gunnison River is primarily responsible for carving the canyon, though many other geologic events combined to help form the canyon as it is today. According to the National Park Service’s Black Canyon website, no other canyon in North America combines the narrow opening, sheer walls, and startling depths offered by the Black Canyon of the Gunnison.

I love canyons and have stood at the edge of some spectacular ones, including the Grand Canyon, and the Grand Canyon of the Yellowstone. Black Canyon is an astounding a sight to behold.

It took my breath away.

The highlight of our trip to Montrose, CO., of course, has been spending time with Alicia, Denny and their children. We went to their oldest daughter, niece Mallory’s, last high school softball game, and celebrated Mallory’s 18th birthday. Mae, Mallory’s 16-year-old sister, also had a softball game, and my nephew, Royal, had a football game. It’s been a great time!